Here Shall The Wild-Bird Sing

Oh dear. I haven’t posted in quite a long time. I could feed you lots of excuses like “I was just so busy.” and the suchlike, but really, that just wouldn’t be true. The truth is, I’m really lazy, and I’m a procrastinator. So, I humbly apologize for not posting in so long.

Things have happened since I last posted. School let out. I went to the ACE International Student Convention with some of my schoolmates and won fourth place in poetry writing with my poem about my great-great grandpa. Some other stuff happened too, but that was all, like, 2 months ago, and I don’t really feel like elaborating on the subject of what I’ve been up to. At least, up until about a weeks ago-ish.

Last Thursday my father, my cousin Allison, and I set off on a canoe/camping trip down the Willamette River. It was absolutely beautiful.

We put in on Thursday at Marshall Island and took out on Saturday afternoon in Corvallis. Most of the time we were just moseying along and hardly paddling.

For most of the trip I would talking so fast that no one could understand what I was saying. By the end of the trip I could talk just fine, but I had somehow rubbed off on Allison, and she couldn’t talk normally. This is just what happens when we’re together. For example, where we camped the second night, there was this kind of sandbar-like thing. Allison and I decided that when the sunset came we were going to watch it from there. When we realized that the sun was starting to set, we grabbed our cameras and I grabbed a blue mat to sit on, and we went running of to get to this spot to watch the sunset. When we sat down we took a few pictures, then we started talking about something totally unrelated. Then, suddenly, Allison shouted “PIKISUNSET!” and pointed frantically at the sun. I’m still not sure if she was trying to say “Look at the sunset.” or “Picture sunset.” But we did get some nice sunset pictures. 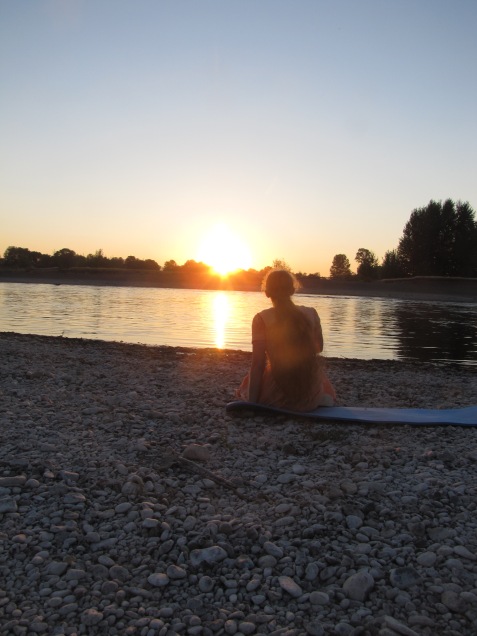 Anyway, I can’t thing of anything else to write about at the moment, so I shall be off.