Here Shall The Wild-Bird Sing

The ACE Northwest Regional Student Convention will be starting in a week or two, and I decided to write a poem for it. Here it is.

My great great grandpa Daniel Kropf lived many years ago.

He farmed his land in Oregon, and reaped, and plowed and sowed.

World War One had started and many folks were mad.

For Daniel preached in German, just like he always had.

Daniel was a Mennonite who thought it was a sin,

To go fight in a brutal war and kill his fellow man.

He chose a life of peace and love with everyone he knew.

To worship God and often pray that He would see him through.

One night some men from Harrisburg resolved that he should pay.

If he didn’t buy some War Bonds, they’d take his life away.

So with heaps of tar and feathers they rumbled down the road,

Then silently crept up the lane to Daniel’s small abode.

“Come Out!” they cried to Daniel as they waited by the gate.

Daniel treaded out the door and and faced his coming fate.

He stopped as he approached the gate. The men seemed white with fear.

Peacefully he talked with them ‘bout why they had come here.

The men, they quickly left his house and Daniel went to bed.

He didn’t know why they’d been scared. Was it something that he said?

A long while later he was told why they were struck with fear.

When they looked past him they had seen a guard of angels near.

Now I live in Daniel’s house and a hundred years have passed.

I hope with all of my young heart His way of life will last.

I will post some things from writing class once I actually remember to bring them home.

Meanwhile, here’s a picture of a clapping bunny. 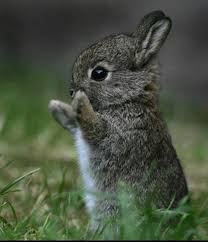 This is just too cute for words. Go ahead stare at it until I remember to post again.